By continuing your navigation on our site, you accept the installation and use of cookies on your computer, in particular for the purposes of collecting information and improving our services.

Escape to les sables d'olonne >
Light and refuge in the seas

Lighthouses, the emblematic landmarks of Les Sables d’Olonne, were primarily utilitarian in the past; they enabled ships to detect the location of dangerous waters near the coast, and guided them towards harbour entrances.
Nowadays, they are of historical, architectural and touristic interest. 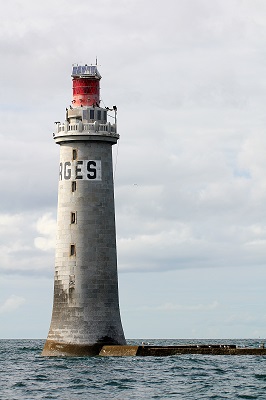 The lighthouse was built between 1857 and 1861 on the rocky shallows of Les Grandes Barges.
Built in Avrillé blue granite, the tower measures 24.81 metres in height and is 12 metres in diameter at the base.
Its luminous range is 15 nautical miles by day and 17 by night.
It was the first French lighthouse to be automated in 1970. Originally designed to indicate the entrance to the port, it was subsequently used to signal a navigational hazard after the construction of the Armandèche lighthouse. It was restored in 1989.

The Phare des Barges has been a listed building since 21 October 2011. 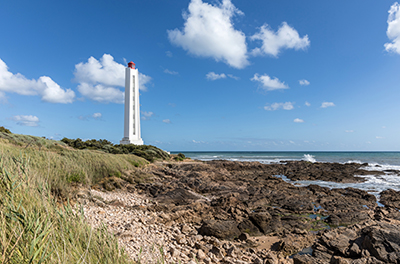 The Armandèche lighthouse, designed by architect Maurice Durand, came into service on 15 October 1968. It was the last lighthouse to be built in France.
It is a 38.96-metre-high white hexagonal tower with a 193-step interior spiral staircase.
The lighthouse’s optical system is composed of three lenses emitting a signal of three white flashes every 15 seconds.
Sailors can see its light up to 24 nautical miles (42 kilometres) away.
It replaced the Arundel lighthouse to guide vessels into the port of Les Sables d’Olonne.
It became a listed building on 3 October 2012.

This lighthouse can be viewed from the outside only. The interior is not open to the public except on French national heritage days (Journées du Patrimoine).. 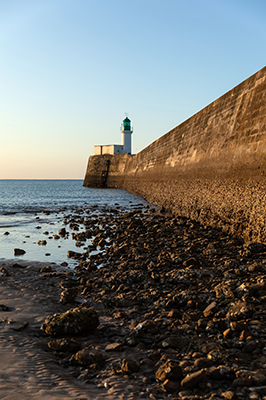 THE SMALL JETTY AND THE GREEN LIGHTHOUSE

Built in the 18th century, the small jetty protects the harbour from silting up. In the 19th century it was used as a tow path along with the big jetty.
The green lighthouse, built in granite at the end of the 19th century, is used by sailors to enter the harbour channel.
In 1944, German troops blew up the small jetty, causing cracks to form in the seawall, from which the sand - on which the lighthouse’s foundations stand - then escaped.
This caused the now-leaning structure to be dubbed “the little Tower of Pisa”. 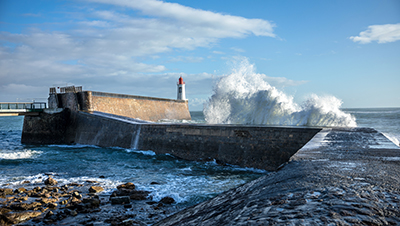 THE BIG (OR SAINT NICOLAS) JETTY AND THE RED LIGHTHOUSE

Work began on the Saint Nicolas jetty in 1764, and ended in December 1910 with the construction of the lighthouse at its head. Standing 12.5 metres high, it is built from blocks of granite.
Originally, the light ran on mineral oil with an electrical rotating mechanism, without a permanent lighthouse keeper.